Time and again our gazebos and marquees have proved their mettle – whether it was being the world’s first inflatable hypoxic swimming and cycling training modules for Australia’s Olympic athletes, helping our client Natalie win the 2017 Elmore Field Days – Best Static Display Award, or being inflatable training marquees for the Qatar Soccer Team, requested by Aspetar. This time, our 3×3 gazebo from Summit Classic signature range outdid everybody’s expectations by surviving the Australian bushfire inferno.

Australia is no stranger to bushfires. However, the 2019-20 summer season was unprecedented, with fires springing out of control near the end of 2019.

Although the middle of January 2020 brought some relief in the form of heavy rains, it wasn’t until the massive downpour during the first weekend in February that the fires could finally be contained. Hotter temperatures, high-winds, and drought were the main culprits behind these blazing fires.

Impact of bushfires on the Australian landscape, flora, and fauna

As of mid-February, more than 46 million acres of land has been burnt since June 2019, that’s twice the size of South Korea!

Nearly 80 percent Blue Mountains world heritage area in New South Wales and 53 percent Gondwana world heritage rainforests have been destroyed. Apart from this, more than a billion animals are estimated to have died in these devastating bushfires. Approximately a third of the koala population has been wiped out, while several endangered species are on the brink of total extinction.

The loss to human lives and collateral damage is equally as sad as the unfortunate loss of flora and fauna. Several firies got injured and many lost their lives along with over 30 civilians. Economists have projected the impact of bushfires to be about $2.4 billion USD or $A3.5 billion.

Needless to say, it has been a very traumatic, tiring, and anxious bush season so far, and it has taken blood and sweat on the end of firefighters, emergency services, and communities to finally be able to contain these grass and bushfires in the NSW region.

It is during times like these, that the true heroes emerge, restoring our faith in humanity, kindness, and bravery. ‘Crocodile Hunter’ Steve Irwin’s family continued his legacy by saving over 90,000 animals and caring for them in their family-run Australia Zoo Wildlife Hospital.

Another particularly heart-warming story is that of Toni Doherty, the lady who rescued a koala out from a burning forest. She spotted the little guy, later named Lewis, around Long Flat, near Port Macquarie, NSW and doused him with water to sooth his burns. Although the poor creature later succumbed to his injuries in hospital, his story raised nearly $1 million for other koalas in need.

Never has the need of the right shelters been felt until these fires. We’re happy to have been of help to our esteemed customer Rick Saur, who found our 3×3 marquee to be well in shape, despite tackling embers.

“Proud to say that the original cover of your marquee survived the fires beautifully, despite serious ember attack in Conjola and numerous burn spots on it after being up constantly since October 2019. Hit it today with some waterproofing paint and cloth, and expect it to last another year or two. Great stuff guys.”

Take a look yourself: The marquee that Rick purchased from us was the Classic Summit pop-up tent 3×3 – our signature range. Currently, this is the best 3×3 gazebo in the market, the strength and durability outperforming all other marquees and gazebos in this range.

The gazebo fabric is all-weather, waterproof, UV-resistant, and flame retardant. It can be bought in ten roof colours or can be digitally branded. The tent is available in 9 other sizes besides the current marquee gazebo 3×3 size, and is designed to withstand years of recreational and professional use.

We source our products straight from our production facility, which ensures our prices are the very lowest. We are so certain you won’t find cheaper that we offer a Lowest Price Guarantee, we’ll beat a lower price by 10% on identical competitors marquee products*. Our network of suppliers and buyers means that no one else in Australia can match us for quality, price and range. 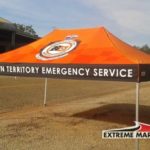